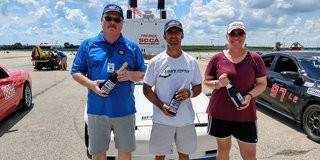 It is a rarity for three Tire Rack SCCA National Solo events to take place over the same weekend, but that’s exactly what happened over the Independence Day Holiday. Bristol, Tennessee welcomed the double-header of a Match Tour and Champ Tour while Topeka, Kansas held its first ProSolo® in over a decade. Like every ProSolo East of the Rockies in 2019, rain played a role and competitors dealt with damp conditions Saturday morning before drying out for the afternoon and staying dry through the remainder of the event.

At a certain point, the kids running junior karts grow up and run with the adults. Riley Heaton made the jump last year, joining his parents in their Street Touring Hatch Subaru WRX. After making the Super Challenge in Toledo, Heaton earned his first class win in Street 4 in Topeka, defeating the reigning G Street National Champion, Lance Keeley, in the process. Ron Williams and David Hedderick claimed the third and fourth place trophies respectively. Topeka was the first national event in a “big car” for brothers Mason and Conner Herrick, driving a Solo Spec Coupe Toyota FR-S. While they weren’t trophy winners, they both picked up the pace all weekend and finished with just 0.301 second separating them. Matt McCabe won the class with Chris Levitz claiming the second and final trophy.

B Street was a small but mighty class of five competitors with great, close competition throughout. Each session brought a change in leader as Jeremy Foley led after Saturday morning before David Marcus took over in the afternoon. It all came down to Sunday morning when Foley was able to improve on both sides to regain the lead and take the class win by 0.239 second. Marcus was unable to improve on Sunday but held off a charging KJ Christopher through the strength of his Saturday afternoon times. The margin from first to fifth in the class was just 1.752 second.

Another five competitors filled the C Street field with along as close of a final margin from top to bottom, just 1.969 second. Paul Frey led as each session ended, but Darrin DiSimo made him work for it as both drivers improved over each session. At the end of class competition, Frey led by just 0.129 second over DiSimo in the second and final trophy position.

For the smallest margin of victory of the weekend, Mike Snyder defeated Mike Herrick by 0.070 second in Street Touring Sport. Snyder’s co-driver, Greg McCance missed out on a trophy by just 0.364 second in third.

Classic American Muscle was the largest class of the weekend with 14 drivers. The CAM Traditional cars swept the podium with Keith Lamming winning the class by 0.632 second over Mark Madarash and Patrick Darling coming in third another 1.156 second back. Dave Whitworth and William Agnor claimed the fourth and fifth place trophies respectively in a pair of CAM Contemporary Ford Mustangs. Madarash went on to face SSC winner McCabe in the Super Challenge Top Eliminator round and emerge as the Challenge Winner. Street 4 winner Riley Heaton won the runoff for third place in the Super Challenge.

Through chance and luck, the Bonus Challenge became a battle amongst locals as James King of Kansas City Region faced Russell Blume of Kansas Region. King walked away with the free ProSolo entry to be used next year.

Complete Results from the 2019 Tire Rack SCCA Topeka ProSolo can be found here.

The Tire Rack SCCA ProSolo series continues in July 19-21 in Packwood, Washington. More information about that event and the complete ProSolo season can be found here.